I love clean and tidy codebases. I love them even more if I don’t have to manually spend hours doing it myself. The problem is not everyone shares the same love and passion for tidy codebases, especially when we’re pressed for time trying to get a new firmware build released.

This is where automated formatting and linting tools come in. These tools are generally run in continuous integration to make sure that all code committed to the main branch follows the team’s agreed-upon format and structure. We can do one better and hook up these tools to run locally on any commit or update to a version-controlled branch by using git hooks.

I’m here to talk about one of my favorite tools that is built upon git hooks, pre-commit, and specifically to detail how you can use it to format and lint firmware code as you program.

This article provides some background and guidelines for using pre-commit to automatically format and lint C-language firmware codebases. We’ll cover general guidelines and go over an example set of checks that can be helpful when working on firmware code.

Note: jump to Using pre-commit for the TLDR! 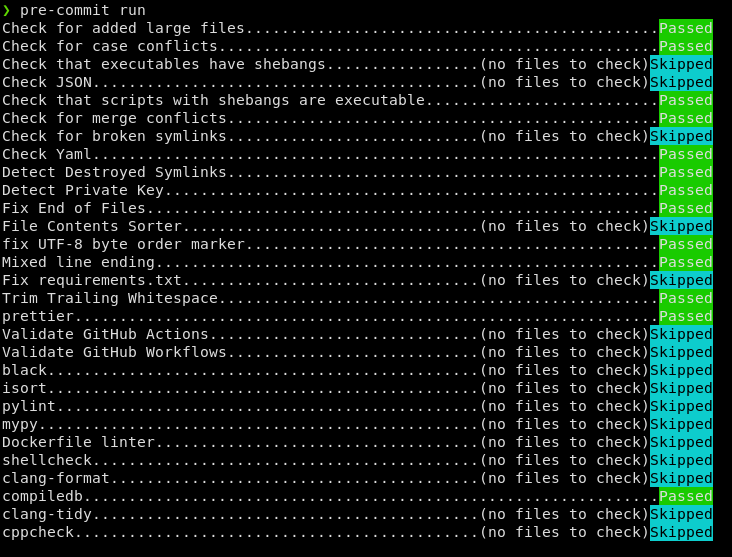 Imagine you want to transform the following snippet:

into this, with the push of a button (or even automatically on save!):

That’s what formatting tools can do. For the C language, some popular formatters are:

Linting is a general term for various static analysis/style checking tools, generally lighter (in terms of setup and computation) compared to full static analysis. Typically these tools are designed to detect, for example:

These types of tools are very common in other software engineering domains (for example, ESLint for javascript), and many popular projects use automated formatters/linters (Linux, Chromium for example).

Why format/lint your source code

A lot of digital ink has been spilt on this topic, but to me, these are the reasons for performing automated styling (formatting) and linting-

The best way to document a project’s style is to have a tool automate it. If a pull request has any style violations, we only need a single comment asking:

Nit: could you run the formatter before merging?

Rather than commenting/suggesting changes on each violation.

It also reduces frustration and simplifies new developer onboarding (no gatekeeping based on mysterious style choices in the repository).

Codebases should prioritize adding automated styling if there’s a style guide that is enforced. For example, Linux has the “checkpatch.pl” tool that should always be run before submitting a patch.

I think it’s generally preferable to have a consistent style throughout a codebase- automated styling makes it easy!

Most editors/IDE’s will support a way to run styling (eg VSCode has the editor.formatOnSave option, including supporting formatting only modified lines).

Aside from styling/formatting code, other tools provide checks such as:

A nice “neutral ground” point for running styling/linting is at step #2; there are countless different methods for modifying source code, which makes it complicated to integrate with any developer’s particular setup (though there are efforts in this space, eg EditorConfig).

git has a notion of “hooks”, which are scripts that run at specific points in the git workflow, including just before committing:

There are a couple of different tools that provide ways of adding checks at the pre-commit stage, some examples:

These all do the job, but have some complexities in setup and configuration that make them a little difficult to install and use ☹️. The whole point is to reduce friction, after all!

I was in the process of adding Arcanist to a repo at one of my previous jobs when my coworker (thanks Patrick!) pointed me to pre-commit:

I was immediately impressed. pre-commit really stands out in these areas:

It took about 10 minutes to add pre-commit to our repo, and it helped me keep my patches clean and tidy!

Why this applies to firmware code

Other popular languages/frameworks have de-facto styling tools, for example:

Firmware repositories tend to be a little different:

Tools like pre-commit are especially relevant to firmware repositories:

There are some wonderful instructions provided here:

Briefly, here’s how to set up and use the tool:

See pre-commit --help for information on running the tool. A useful command is pre-commit autoupdate, which will update all the checks to the latest tag! 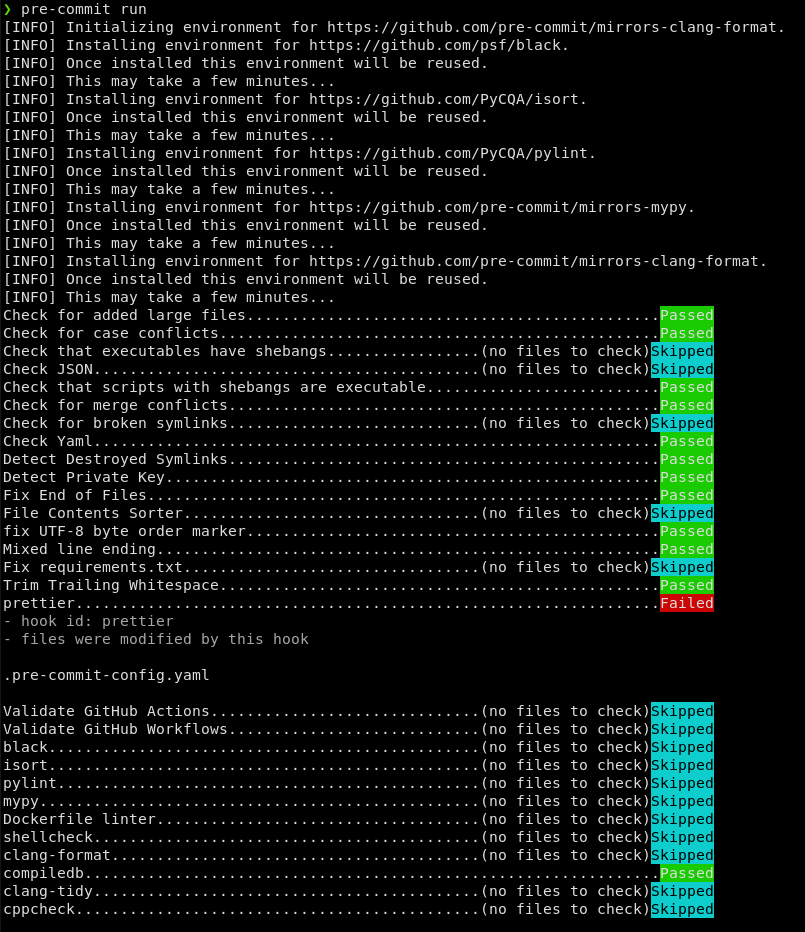 pre-commit is configured with a file name .pre-commit-config.yaml at the root of your repository.

This file selects the hooks to be installed + used, and contains other configuration values such as paths to exclude from linting, etc. The documentation here is the reference for config values:

There are a lot of existing hooks!

Note that individual tools will honor their normal configuration files (eg .prettierrc.yml), so if you have some tools already set up, running them from pre-commit will be the same.

➡️ A configuration file with all the discussed checkers can be found here.

For a C-and-python firmware repo, here’s the config I typically start with:

The next subsections describe each check above.

From the pre-commit-hooks repo, these are basic text checks. Most are pretty self-explanatory- I’m particularly fond of trim-trailing-whitespace, since my editor is set up to do that when saving a file by default 😅.

If your repo has standalone scripts (chmod +x), the following additional checks are quite useful (I’ve often goofed this up accidentally):

The requirements-txt-fixer hook only applies if your repository has a requirements.txt file for Python packages.

Some other quite useful ones that are more situation-specific:

prettier is a Javascript tool that can format many different language types. I find it does a nice job on Markdown, Javascript, JSON, and YAML files in particular.

Installing prettier can be a bit of a pain if you don’t have node etc already available; pre-commit manages the tool itself here, which is ✨ amazing ✨!

Another very useful check is pylint:

However, you’ll want to spend some quality time with your .pylintrc file to tune to your needs. Out of the box pylint is very strict (but 100% compliance often leads to nice code!).

There are a lot of other nice checkers available for python projects (eg bandit), definitely worth looking through them.

This runs the clang-format formatting tool over your C/C++ source files. You’ll probably want to add a .clang-format file to the base of your repo to configure the tool; for example, here’s what I usually use for my personal projects:

That config is just selecting the Google C++ style built in to clang-format.

The hook provides its own copy of the clang-format binary, which means there’s no required setup outside of pre-commit! If you’re managing your own clang-format tools for your repo, you could instead call clang-format as a repo: local + language: system hook.

To configure clang-format, either add a .clang-format file to the repo (the default), or specify command-line options in the hook config (eg args: ["-style=Google", "-i"]).

Note that clang-format has a lot of configuration options. Recommendations for how to tune a config is outside the scope of this article, but here’s some starting guidance:

There’s also a community-provided clang-format-diff, which uses the git-clang-format tool to only apply formatting to lines modified in the current patch (if you’re not ready to run a format pass across your entire repo).

Extra note: if you do run a whitespace or formatting pass over the entire repository, I recommend setting up a .git-blame-ignore-revs file, see here for more information:
https://michaelheap.com/git-ignore-rev/

There are a few more hooks that are application-specific but provide a lot of value.

clang-tidy is a powerful C/C++ linter that can catch a lot of straightforward errors (ex: forgetting to close() an open file descriptor). While not as sophisticated as full static analysis checkers, such as Code Checker, it’s quite useful.

Using it is a little complicated, depending on how your project is set up. Generally, you’ll need the following steps:

To drive steps 2 + 3 from pre-commit, here’s an example .pre-commit-config.yaml section:

Setting up and configuring clang-tidy can be difficult (you’ll almost certainly want a .clang-tidy configuration file). Here are some articles that talk through the process:

The cppcheck hook relies on the cppcheck binary being available on the host system (sudo apt install cppcheck on Ubuntu) - note the - repo: local and language: system specifiers for the hook.

If you’re using Docker (eg for reproducible builds or CI), this provides a lot of nice recommendations for Dockerfiles:

If you’re using GitHub Actions for CI, these hooks do some validation on the config files that can save some churn when testing new actions:

Some useful and quality-of-life checks for shell scripts:

If you’re using Python type annotations, you can have mypy run in pre-commit:

Note: take a look at dmypy for a way to speed up mypy on larger projects, but be sure to test that it’s working correctly for you: https://mypy.readthedocs.io/en/stable/mypy_daemon.html

Here’s a couple of examples of how pre-commit could be used in CI: 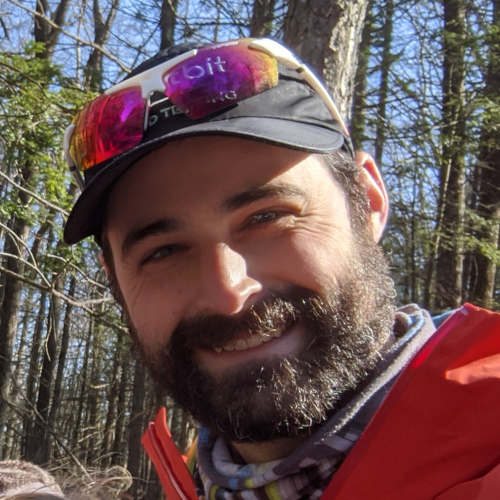