Firmware update capability has become a must-have for most devices. Whether to add new features after launch, fix bugs, or urgently patch a security hole, firmware updates gives modern teams the flexibility they need to move fast and react to a changing environment.

I’ve written at length about firmware updates in the past, including on Interrupt with a Firmware Update Cookbook and a post about code signing, and even recorded a webinar on the topic.

Since then, I’ve heard from some of you that they’ve run into roadblocks implementing firmware updates on bandwidth-limited devices. Indeed devices connected over low bandwidth links like 900MHz wireless or LoRaWAN often struggle to download a full firmware image in any reasonable time.

One solution is to implement delta updates, a technique that allows devices to download only the bits and pieces they need rather than full system images.

In this post, we introduce the concept of delta (i.e. partial) firmware updates, explain why you may want to implement them in your projects and go through an example implementation from top to bottom.

Note: the next few sections provide an overview of delta updates, why it matters, and how it works. If you’d like to skip straight to implementation, click here.

The concept behind delta updates is intuitive. When we put together a new version of our firmware, we do not change every single line of code. Instead, we edit specific sections of the code to change the behavior of the code and introduce a new feature or fix a bug.

This means that our new firmware is largely made up of the old firmware, plus a few changes.

Wouldn’t it be neat if we could collect only the code changes and send those down to the device, rather than the full firmware update? This is exactly what delta updates allow us to do.

The process is broken up into two steps. First, we need to extract the bits that have changed from our new image, we’ll call it DIFF. 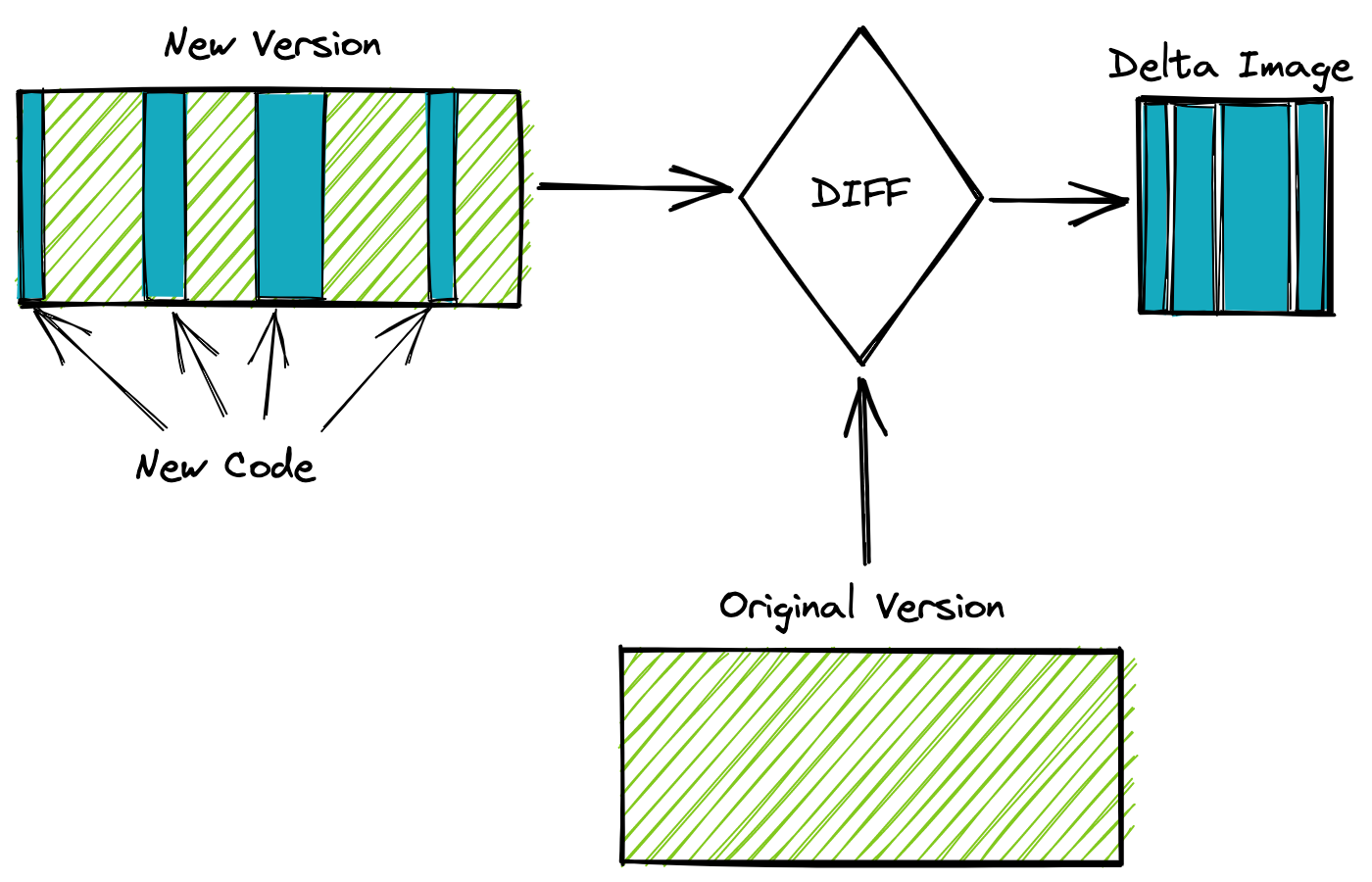 Then we reconstruct our image from our original firmware and our delta image, which we’ll call PATCH. 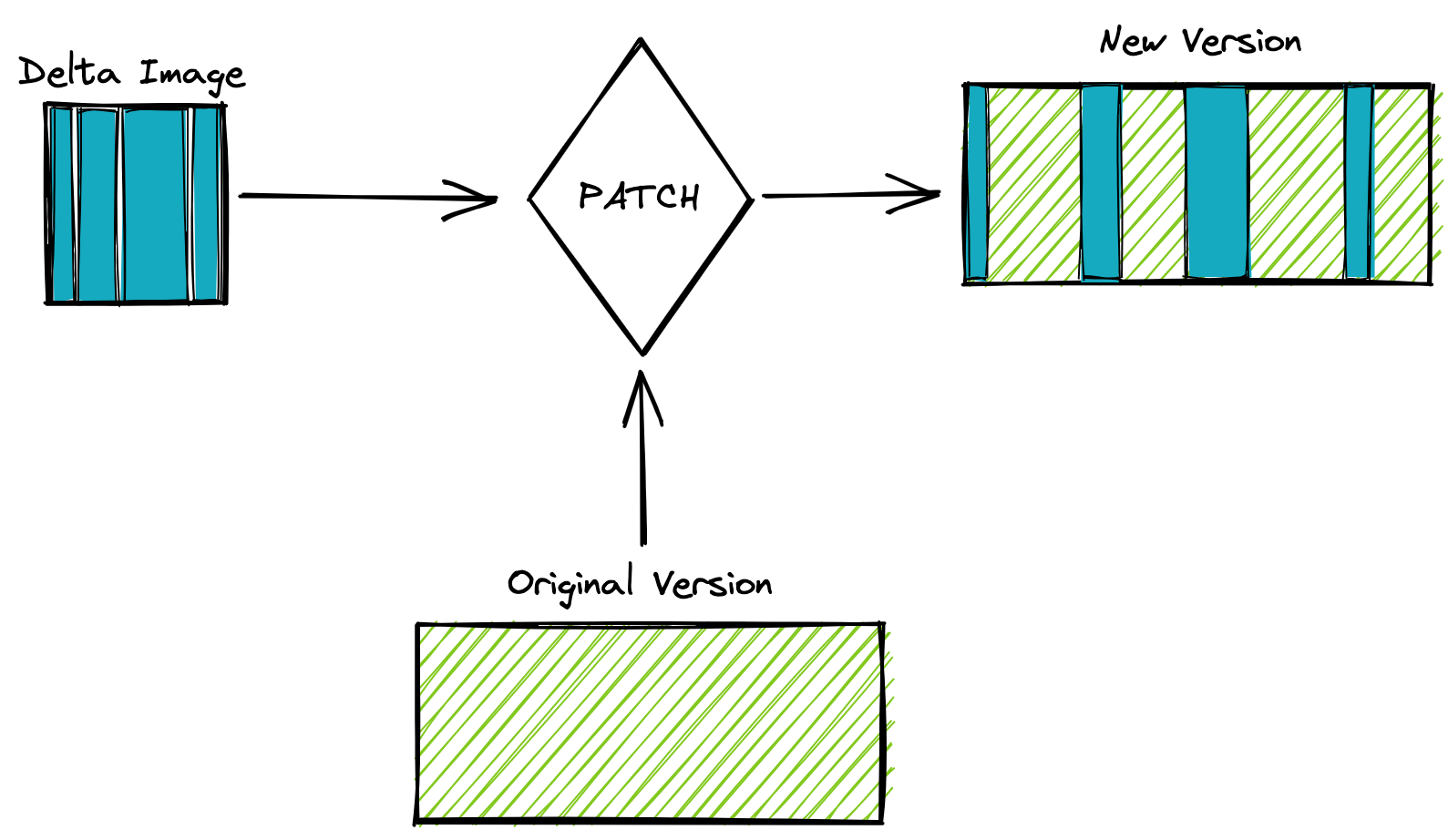 Pros and Cons of Delta Updates

The obvious advantage of delta updates is the small size of the resulting image. Delta images are often one to two orders of magnitude smaller than full system images. The size reduction has multiple beneficial effects:

However, there is no such thing as a free lunch! Delta updates come with some downsides worth considering:

That last point bears elaborating a bit. Unlike all system images, each delta image is only compatible with a single original version. In other words, while a system image for firmware v1.2.0 can upgrade any prior version to v1.2.0, a delta update for “v1.1.0→v1.2.0” can only upgrade devices running v1.1.0 to v1.2.0. As you can imagine this creates a serious challenge at the QA stage, since the combination of things to test is much larger than with a system image.

This also means that your OTA backend needs to be sophisticated enough to present delta updates when devices are running compatible versions, and in all other cases present a full system update. And each firmware release requires you to compile and upload several delta images for your versions in the field.

Our OTA backend at Memfault supports delta updates! You can read more about it in our documentation.

One of the key components of a delta update system is a binary diff and patch system. There are remarkably few libraries that provide this functionality. The excellent BSDiff1, and XDelta2 both require too much memory to work on most embedded systems without modification. This leaves Jojodiff3, which has been helpfully reimplemented by Jan Jongboom4 in his JanPatch library5 optimized for embedded systems.

While Jojodiff is neither the fastest nor the most efficient, it requires constant space, linear time complexity, and can patch a file in place. These features make it well suited to limited environments such as MCU-based devices.

Note: we’ve heard from some teams that they have successfully modified XDelta and BSDiff to do in-place, fixed memory delta patching. This was more effort than made sense in the context of this blog post, but it may be the right approach for your project. As always, your mileage may vary!

Like we did in our previous posts, we use Renode to run the examples in this post. We are using a virtualized STM32 on which we are running a complete firmware image. The previous post contains detailed instructions, but in short:

You can then find the Renode monitor via telnet and start the simulation:

You can also tail the device’s USART output via telnet:

As a reminder, this is what our device firmware update architecture looks like:

With the following functionality for each block:

The Loader and the Updater both may want to implement delta updates, while the Application or the Bootloader would be mostly untouched.

First things first, let’s create a new version of our firmware. As an example, I added a print line that says “This application was patched!” at boot when our Application runs.

To make things easy, I create a .patch file that I can apply and un-apply from my codebase. I can then build my new firmware image with the following make commands:

We can then convert the image to a .bin file, sign it, and stick a header to the start of it as we did in previous posts.

Now that I have my new image app-patched.bin and my original firmware app.bin, I need to create my delta image. To do so, we can either use the original Jojodiff or Jan’s JS version, jdiff6, which can be installed via NPM (npm install -g jdiff). I chose the latter.

This translates to the following make commands:

The resulting patch.bin is 1252 bytes, down from 7908 bytes for the full app image. This is only a ~6x reduction in size but, in practice, you will see much better results on larger and more complex applications.

Since we’re not concerned with downloading the image from the cloud for the sake of this blog post, we just hardcode the patch.bin inside of our Loader image using objcopy as we explained in previous posts.

Note: C23 which was just finalized will include a new #embed preprocessor directive which makes embedded binary and other files inside of a C program much easier. We’ll use that instead of objcopy in the future!

Janpatch is distributed as a single header file which makes it easy to integrate into your firmware build. Simply clone the repository, stick it on your include path, and #include <janpatch.h> in your C code.

Everything the library needs to work is passed via the janpatch_ctx struct. Let’s take a look at it:

First come the source, patch, and target buffers. These are simply RAM buffers used by Janpatch as working memory. The author recommends matching the size of your flash sectors for best performance, likely because the whole buffer is written at once, so you’ll save on erase times.

The next four fields are function pointers that expect File I/O functions. On POSIX systems you can simply pass fread, fwrite, and fseek, and define JANPATCH_STREAM as FILE. However, we are on a bare metal system and will need to implement our own. I’ll call this module Simple File I/O or simple_fileio.

We need our simple_fileio module to be able to read data from our memory-mapped bin file, and both read and write data from/to our firmware slot in flash. We’ll also need to keep track of seek offsets as we go to comply with the POSIX-like API.

First, we’ll create a new type to encapsulate all of that state and serve as our JANPATCH_STREAM type. We’ll call it sfio_stream_t:

We can then implement sfio_fread which reads from RAM or image slot at the stored offset and writes it to an output pointer. Note that while the POSIX API accepts a size and a count (for a total number of bytes read of size * count, Janpatch only ever sets a size of 1 so we made the simplifying assumption that it would always be 1.

Next, our sfio_fwrite function needs to write the provided buffer of count bytes to our RAM or image slot, as follows:

Last but not least, sfio_fseek simply needs to update the stored offset value. Note that Janpatch only ever uses SEEK_SET so we can use that to simplify our code again:

Astute readers may have noticed that we introduced new functions: dfu_read and dfu_write, which we use to write to and read from our image slots. Those functions convert slot addresses to physical addresses and then use memcpy or flash APIs to read/write the data. Here’s a simple implementation that does no bounds checking;

We can now fill in our janpatch_ctx:

That’s it! The full example is available on Github in the Interrupt repo.

Testing it all in Renode

Once we’ve built all of our image, we simply need to start Renode by running the provided start.sh or mono64 Renode.exe renode-config.resc --port 4444 --disable-xwt.

We then perform the update on the USART console:

We can see “This application was patched!” print after the update (but not before). Everything is working!

With the help of some great open source software, implementing delta updates in our Loader turned out to be relatively easy. A huge thanks especially to Jan Jongboom for his reverse engineering of the jojodiff format and implementation of an embedded-friendly patch library.

A separate post could be written about how to wrangle those updates on the cloud side. Getting the right binary to the right device becomes more complicated as we roll out features like Delta Updates. Perhaps we will tackle this topic next time.

As always, we’d love to hear from you. Do you use a different approach to delta updates? Let us know! And if you see anything you’d like to change, don’t hesitate to submit a pull request or open an issue on Github

François Baldassari has worked on the embedded software teams at Sun, Pebble, and Oculus. He is currently the CEO of Memfault.