Ever had issues getting a debugger to flash code? Do your breakpoints not seem to work? Are you hitting weird errors while stepping through your code? Does your debugger seem flaky? Are you confused by all the buzzwords used around embedded debugging (i.e SWD vs JTAG, OpenOCD vs pyOCD vs JLinkGDBServer, CMSIS-DAP vs ST-Link vs J-Link, etc)

I’ve run into all of these issues! Having a basic understanding of the technology stack in use can be helpful for working through or around issues you may encounter with your debug setup!

In this article we will walk up through the hardware and software stack that enables debugging on ARM Cortex-M devices, demystify what is actually happening and go through a step-by-step example, tracing a basic debugger operation end to end using a logic analyzer.

All Cortex-M’s implement a framework known as the Coresight architecture1. This architecture is broken into several major components. Notably,

In this article we will explore the functionality of the DAP.

The DAP is an implementation of the ARM Debug Interface Architecture Specification2. The specification defines a set of Debug Port Registers that can be accessed to perform operations on the chip as well as the pinout a MCU needs to expose so external debuggers can attach to it. This is quite nice because it means reading state ( memory, registers, etc) over the DAP is pretty much the same operation regardless of the ARM MCU being used.

The Debug Port can be used to configure transactions and read or write to one or more Access Ports (AP). An Access Port exposes an interface to different parts of the MCU. The only requirements for an AP are that they must: 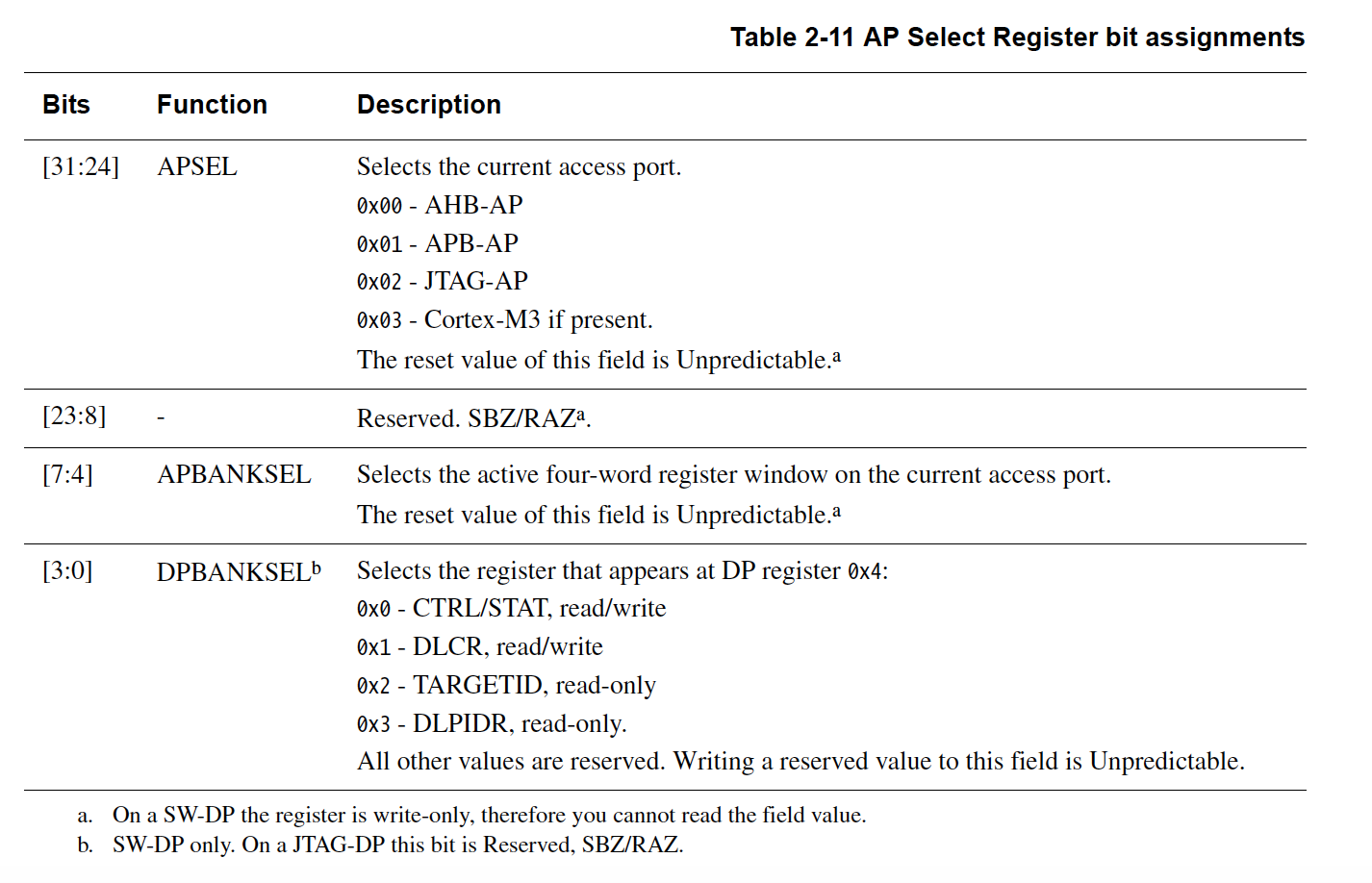 The Advanced High-performance Bus (AHB) is a bus present on ARM devices that interconnects the memory and peripherals present on the MCU. The AHB-AP exposes access to this bus via several registers. The most common registers used in the AHB-AP are:

The DAP spec defines three different protocols which can be used to expose an interface from the Debug Port to the outside world. They are:

The next step is getting a computer to talk to the MCU. Typically another piece of hardware (often referred to as an “interfacing MCU”) will be used to map from the SWD or JTAG connection to a USB protocol that can talk to the computer. Sometimes the interface will be provided via an external dongle and other times via an integrated IC on the development board being used. If you are designing your own development board, it’s always a good idea to expose these debug pins to an external header to keep your options open.

There are quite a few interfacing options you will see depending on the ARM MCU, IDE, and development kit you are using. Some of the most popular are:

Once you have selected a debug probe, the next step is choosing what software on the computer to use to communicate with the probe.

There are numerous options available but an overwhelming majority of the software stacks available will expose a gdbserver interface which exposes the “GDB Remote Serial Protocol”9 on one side and talks the necessary debug probe protocol to the interfacing MCU on the other. Even if you are using an Eclipse based IDE (i.e NXP’s MCUXpresso, STM32CubeIDE, TrueSTUDIO, WICED-Studio IDE, etc), the debug interface is usually leveraging a gdbserver behind the scenes.

When selecting the software to use, the other item you want to look at is its board support. If the MCU in use has an internal micro flash, many of these probes also come with support for programming that flash so you can easily load new programs on the MCU.

The actual GDB server used is usually based on the debug probe selected. Some of the common choices are:

Features like RTOS Awareness – the ability to see all the tasks currently active on an MCU when you run info threads or view a task list in Eclipse – needs to be implemented on the gdbserver side. When a GDB client connects to a server, it will ask the server for the thread list. If the server can’t resolve the thread list, it will only show the stack trace for the active task.

The RTOS awareness implementations all wind up looking pretty similar. The GDB Remote Serial Protocol has a message, qSymbol, which can be used to ask the client to look up the address for a given symbol (i.e pxCurrentTCB would be a symbol you’d need to look up the address of in order to implement a FreeRTOS plugin). The server will look up the symbols it needs to uncover the Thread Control Block (TCB) for all the tasks in the system. Once it has the list, the gdbserver will recover the state of each thread by issuing reads to the memory of the MCU. Sometimes to aid in the recovery of this information an RTOS will export special symbols to expose offsets of TCB info. (i.e Zephyr16)

Conveniently, many of the GDB Server options expose APIs for implementing thread awareness. The ones I am aware of and have implemented RTOS plugins with include:

A ton of MCUs these days allow one to execute code from external flash parts. Very rarely will the debug probe software have a pre-existing flash loader for a custom configuration like this. SEGGER conveniently has an API to implement a Custom Flash Loader.

The way it works is you provide micro-code that is flashed into RAM to initialize, read, erase, and write to the flash part of interest. The SEGGER JLinkGDBServer will just jump to these functions to perform the operations on the external flash. I’ve implemented a few of these and while it can be a convenient tool to have, developing these plugins can be quite challenging as this code runs before the debugger starts. So a failure will not drop out to a breakpoint you can look at. The “best” way to debug these plugins is to sprinkle messages in RAM which can be read post-mortem.

All of the pieces we’ve mentioned stack together and make up “the debugger”.

There a few common interfaces to the stack:

Now that we understand a bit about the software stack in play. Let’s trace through a transaction to better understand what’s happening end to end.

For this setup we will use:

The end to end path of our debug setup looks like this:

The following image from the ARM Debug Interface Architecture manual2 captures what the path looks like inside the NRF52840. The “physical connection” in this case is the SWD path in the image above. 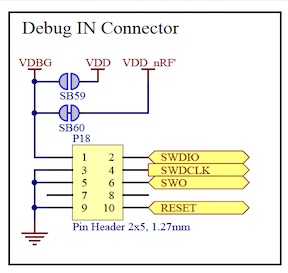 In the Saleae Logic App, I then enabled these 2 pins, and added the SWD analyzer: 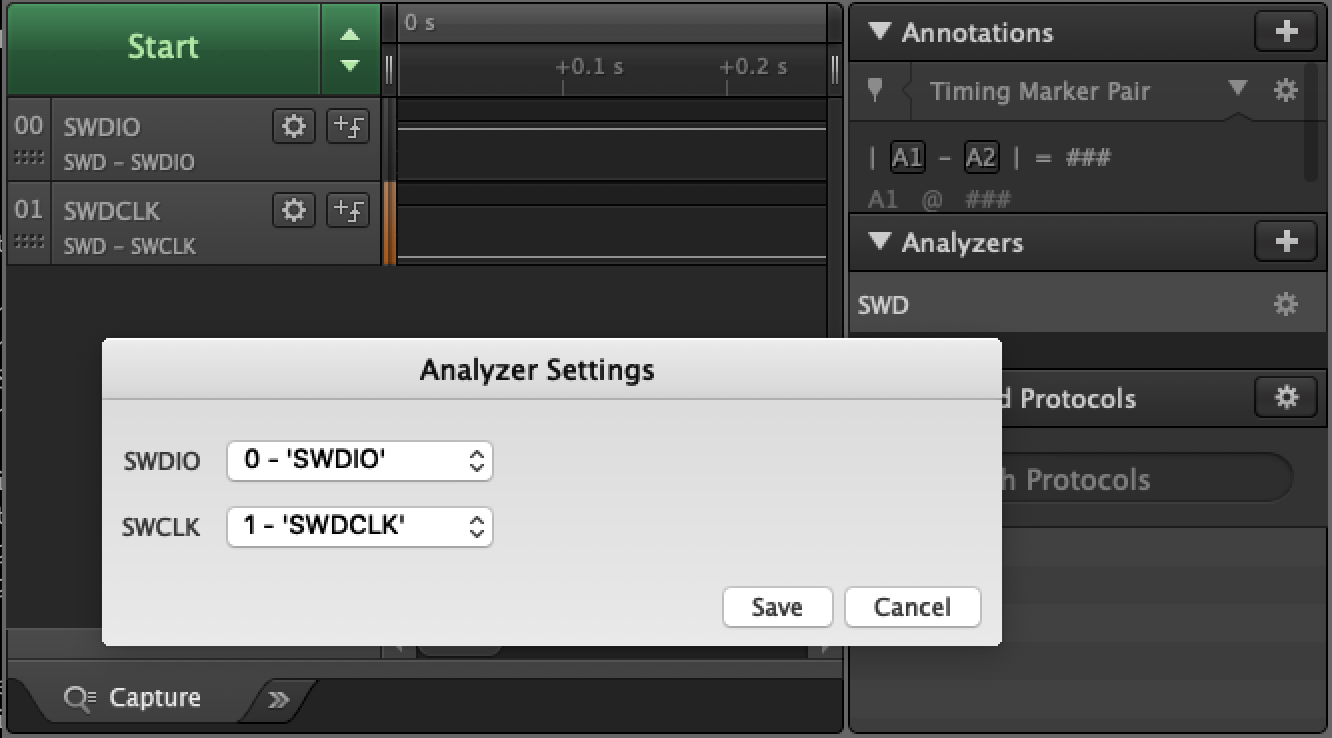 For the purposes of this experiment we will look at what is happening with SEGGER J-Link. The invocation I used was:

I manually set the speed to a low value just to play it safe. You usually want the sampling rate to be at least 4x faster than the maximum frequency being measured. So if SWDCLK is running at 500kHz, we want to sample with a rate of at least 2 MegaSamples / second or greater.24 However, the faster we sample, the better our timing resolution will be.

To flash the device and attach to the GDB server, I used my personal favorite debug client, the GDB CLI:

Now that we have the Saleae, let’s trace a read transaction. The steps we will walk through below would work for any other type of transaction you want to investigate as well:

Let’s read the g_crash_config variable and see what happens

First, we need to halt GDB by running CTRL-C, then “Start” a capture within the Saleae Logic App and run this in GDB:

We can determine the address and size of the read that needs to take place by inspecting the variable in gdb:

The first transaction we see over the wire gets decoded by the Saleae as follows:

We see it’s an ABORT Debug Port write. This is a good operation to run before issuing any transactions because it will reset the state of the current AP and put the debugger into a known state. If you wanted to decode the transaction without the Saleae analyzer, the ADIv5 reference manual2 provides the information needed. The structure for a write operation looks like this:

The Saleae analyzer also lets us export the analysis as a CSV file. Let’s walk through the transactions that we see. I’ve added some observation notes inline below:

That’s interesting, it seems like the debugger is caching 16 bytes of data. If we “Start” a trace while reading in this memory range we will see no SWD transactions get issued! To test it out, start the Saleae trace again and run

This means the JLinkGDBServer must be caching results and not always issuing requests to the actual MCU.

For reference, I’ve included trace here. The original trace was in the same directory.

We hope this post gave you a better understanding of the technology that makes up the Cortex-M ARM debug stack and that in the future when you run into a debugger issue you have a better idea of where to start looking for issues!

Future topics we’d love to delve into related to debuggers include the Embedded Trace Macrocell (ETM) and Data Watchpoint and Trace (DWT) peripherals, as well as implementing thread awareness and flash loader plugins.

Are there other topics you’d like us to cover? Or are there topics in this article you’d love to see more details on? Just let us know in the discussion area below! 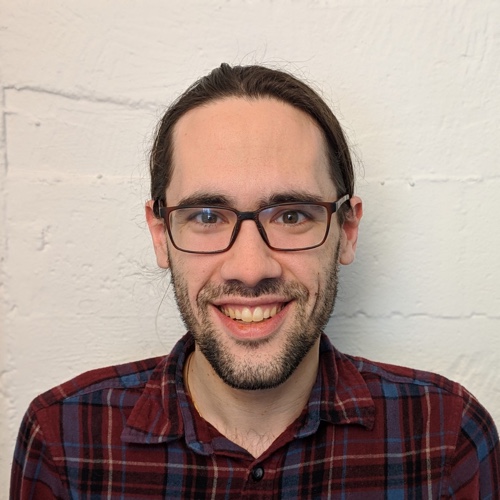 Chris Coleman is a founder and CTO at Memfault. Prior to founding Memfault, Chris worked on the embedded software teams at Sun, Pebble, and Fitbit.