If I had to choose one significant aspect that I was not aware of before starting my career as a firmware developer, it would be how much time is spent not actually developing, and instead debugging firmware!

I’ll leave you with a few figures taken from the 2017 Embedded/EETimes Embedded Markets Study survey which showcase the significance of debugging in the professional life of a firmware developer. 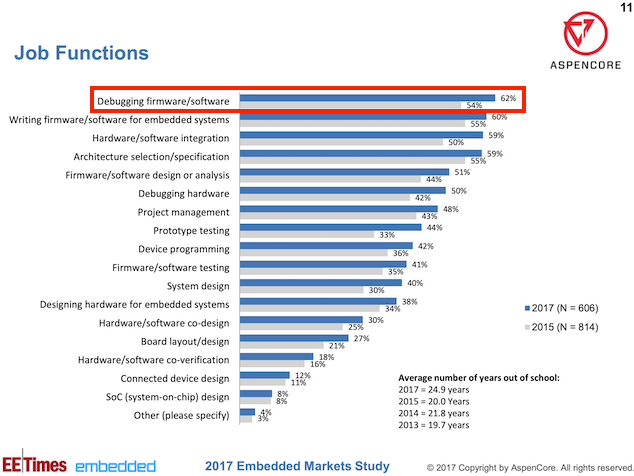 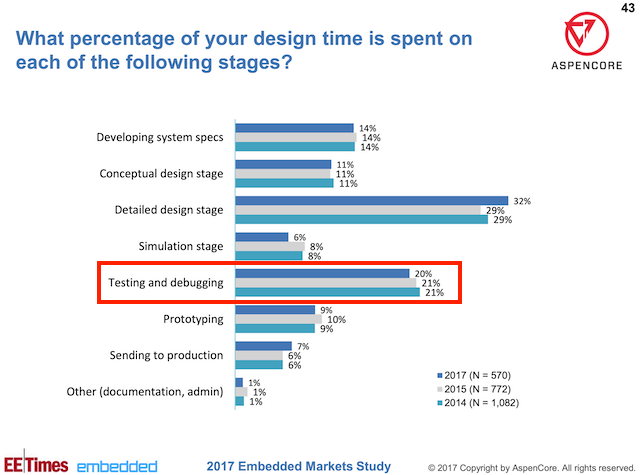 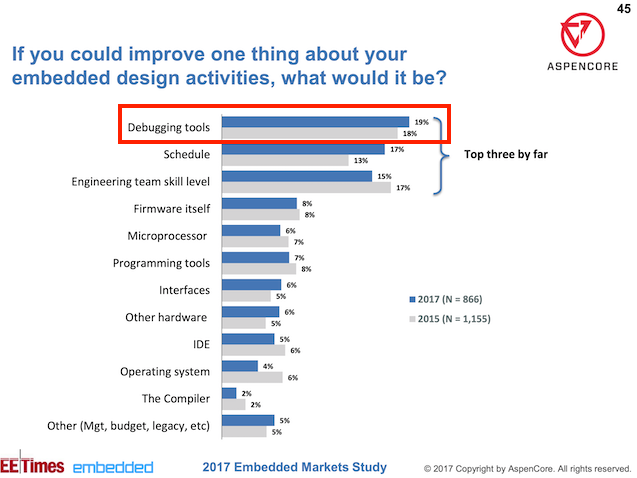 Debugging is generally difficult, and it gets even more difficult for firmware applications and has more limitations compared with a mobile or web application.

This is due to a few factors, some of which are:

GDB was developed by Richard Stallman in 1986 as part of the GNU system. It is one of the most popular debuggers out there, and for many good reasons!

Some of the most important are:

Because of these reasons, we believe it is extremely helpful for a firmware developer to at least get some exposure to using GDB.

In this post, we’ll walk through setting up GDB for the following environment:

We’ll then go through demos of utilizing the most useful features of GDB to debug our example application.

Here’s a list of the hardware components required for following the steps in this tutorial:

Here’s a list of the software packages required for following the steps in this tutorial:

In order to use GDB with any embedded system, we need to set up:

For each of these downloads, you can place them anywhere on your machine. I recommend having them all in a single folder, to make it easier to locate later on.

Installation of the nRF5 SDK is straightforward. All you need to do is download the SDK tarball from Nordic’s website and then extract it.

Once you extract it, you should see the following directory structure:

Next, we need to install the nRF5 Command Line Tools. These include nrfjprog, which is a tool for programming your nRF52 development kit via the Segger J-Link debugger and needed in our case for working from the command line.

First, make sure you select the appropriate operating system (macOS in our case).

This is what the contents of the folder should look like:

The SEGGER J-Link software is needed for the GDB Server interface to the nRF52 chipset on the development kit.

This download (for macOS) is a .pkg installer file. Once you download it, simply double-click it and go through the installation process. 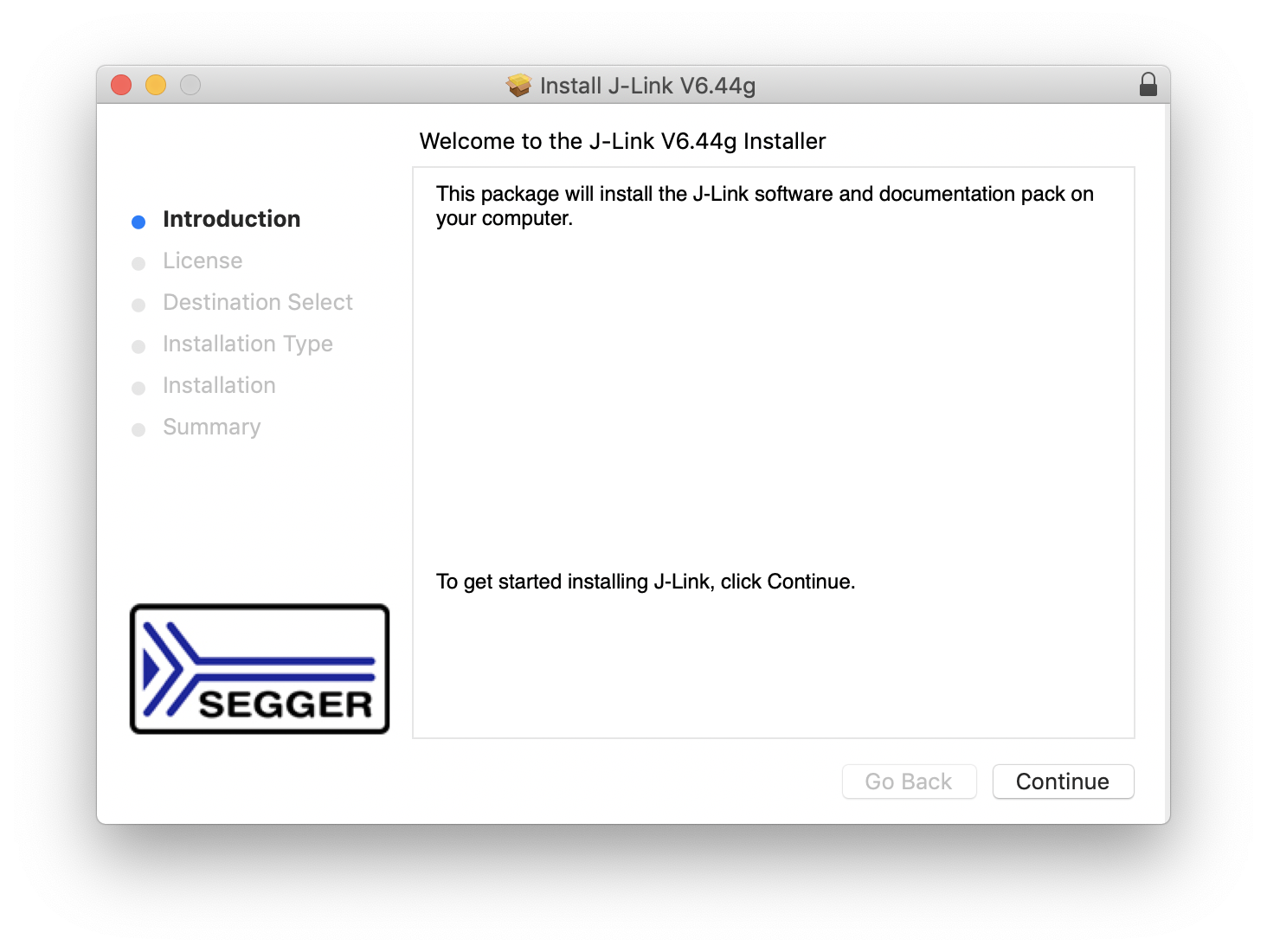 The next software package that we need to install is the GNU Arm Embedded Toolchain which includes the compiler (gcc) and debugger (gdb) for the Arm architecture (which the nRF52840 chipset is based on). 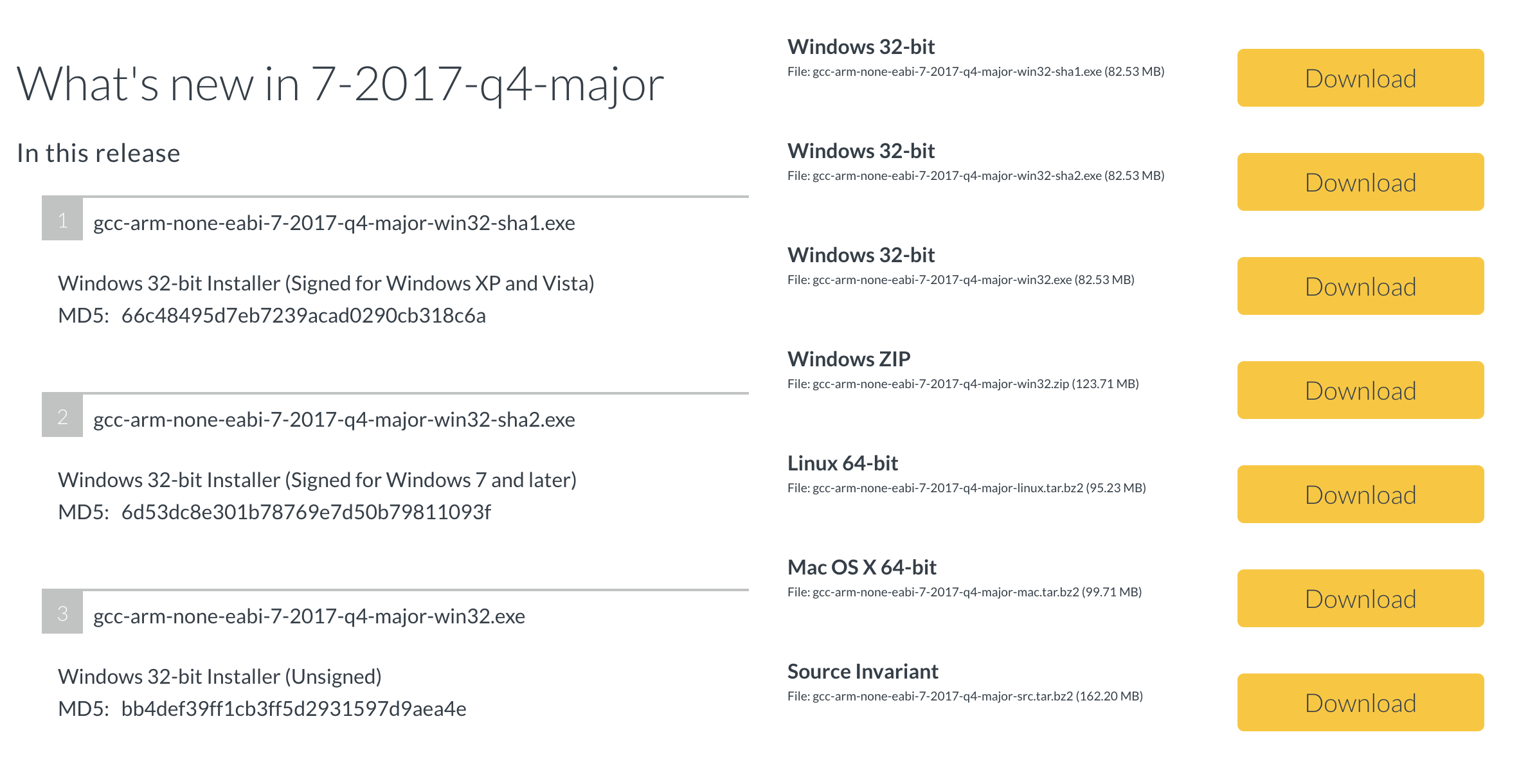 After you download the package, simply extract it to your folder of choice.

My choice for a terminal program that I use across projects is a program called CoolTerm. What I like about this program is its simplicity and that it supports all the major platforms (Windows, macOS, and Linux).

For now, all you need to do is download it, open the package and copy the application file to your Mac Applications folder so you could launch it in the later steps.

In order to access the necessary commands that we’ll be calling from anywhere in your system, you need to add their paths to the system $PATH environment variable.

To do that, open up a Terminal session and type the following:

Once you’ve done that, go ahead and add the following lines to the bottom of the file:

Make sure to replace <Your Folder> with the appropriate folder name where you placed those packages on your system.

We don’t need to add any paths for the SEGGER J-Link software because it ran as an installer and would have already added the necessary binaries to our system.

After you’re done editing and saving the paths file, close the Terminal and then start a new session to make sure the updated paths file gets loaded. Alternatively, you could just execute the following command to reload .bash_profile:

To verify, you can type the following command:

That’s it for the setup part, now on to the fun part!

Before we can actually debug the application and use GDB, we need to build the example and flash it to the development kit.

Following are the steps we need to take:

In our tutorial, we’ll be using the UART example included as part of the nRF5 SDK (version 15.3.0). This example is located at:

You’ll notice there are many subfolders in that folder. We are mostly interested in the following highlighted folder in the screenshot:

Before we build the example, let’s make sure we have the right compiler flags for debugging. This is necessary to include debugging symbols that help GDB present useful debugging information to the user.

To check the compiler flags, edit the Makefile located at <nRF5_SDK_Folder>/examples/peripheral/uart/pca10056/blank/armgcc.

In the Makefile, look for the “Optimization flags” section:

Let’s modify this to reflect the following changes:

We changed the compiler’s optimization level to “-Og”, which optimizes the debugging experience. According to GDB’s documentation for Optimization:

Turning on optimization flags makes the compiler attempt to improve the performance and/or code size at the expense of compilation time and possibly the ability to debug the program.

-Og should be the optimization level of choice for the standard edit-compile-debug cycle, offering a reasonable level of optimization while maintaining fast compilation and a good debugging experience. It is a better choice than -O0 for producing debuggable code because some compiler passes that collect debug information are disabled at -O0.

Now, we can go ahead and build the project. To do this, run the following command: 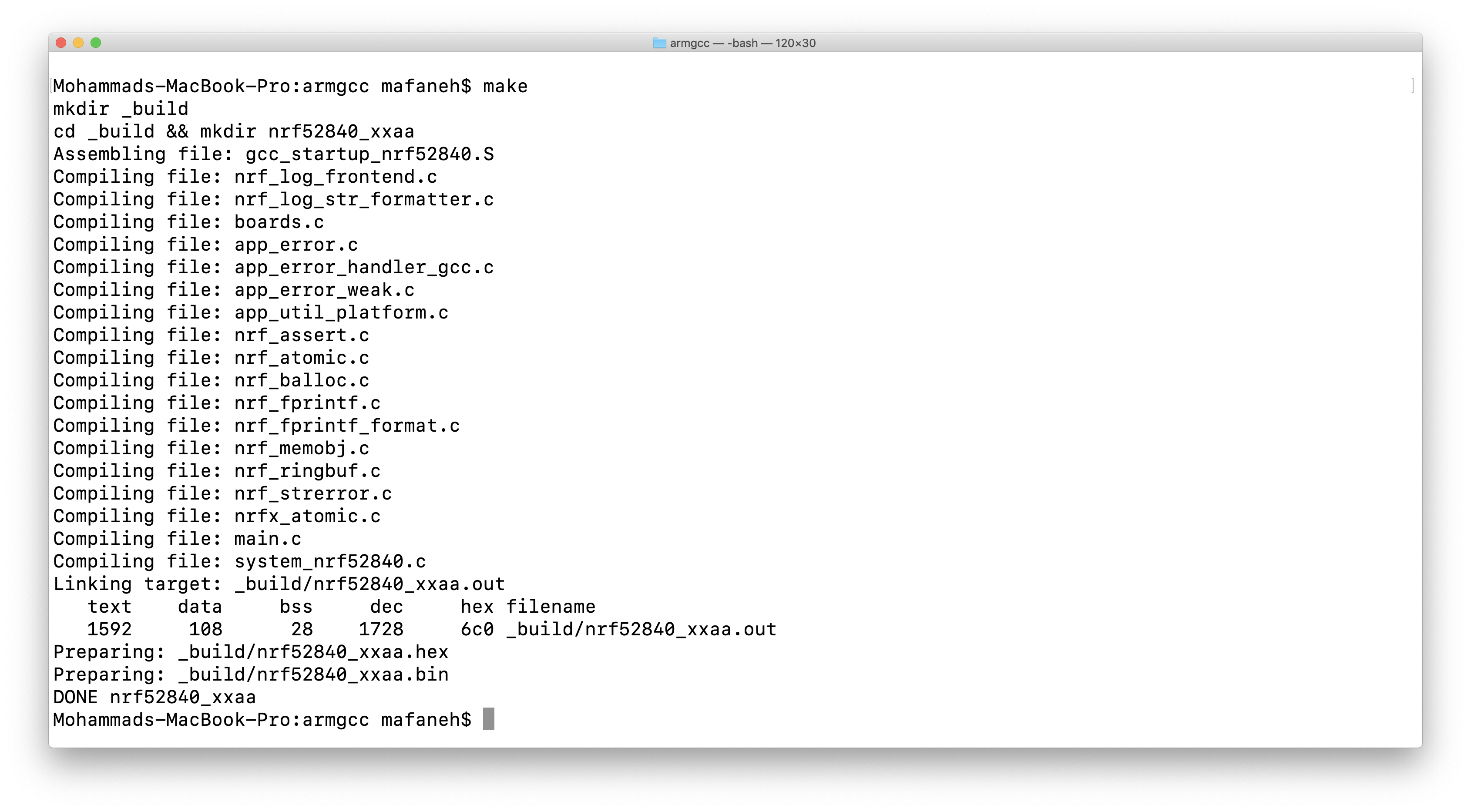 The second step is to get the hardware set up to run the example.

Here are the steps to accomplish this:

Now the nRF52840 development kit should be flashed with the UART example and it should be running properly.

To verify that, we will be using a serial terminal program.

As we mentioned earlier, we’ll be using a program called CoolTerm.

There are three parts to get this working:

Now that we have the application running properly, let’s go ahead and set up the debugger.

There are a few steps to get this working.

Now that we’ve been able to connect the debugger to the nRF52 chipset on the development kit, it’s time to start having some fun!

Hint: In the GDB console, pressing “Enter/Return” on a blank line will repeat the last command called.

Here are some of the most useful GDB commands that you can use for debugging your application:

The first command you should be aware of is the help command. You can use help followed by any other command to learn everything you need to know about the usage of that command. Or you could simply type help in the GDB console to see what options are available.

For example, let’s run help for the “breakpoint” command: 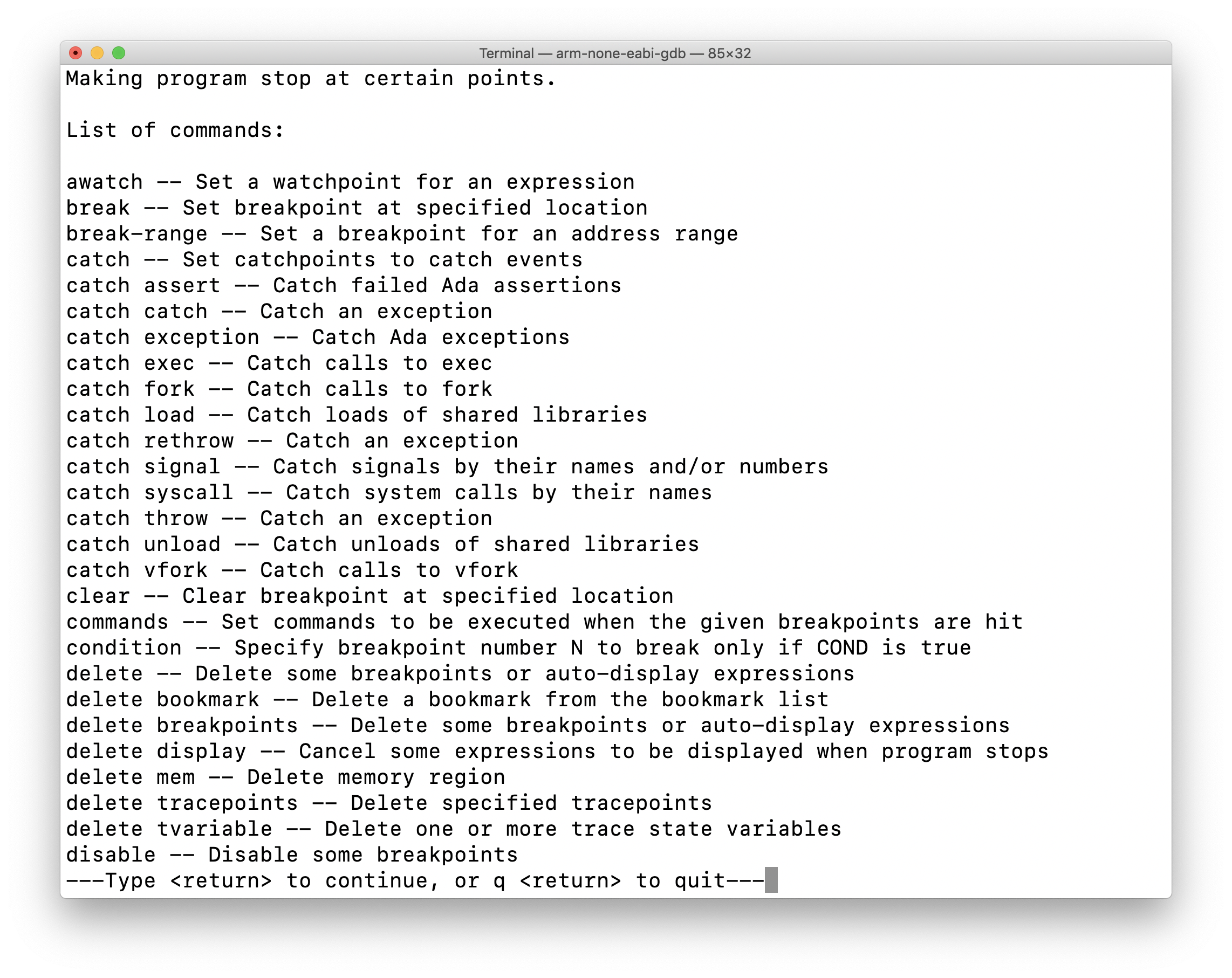 The Breakpoint command is used to set a breakpoint at a location telling the debugger to halt the application when the program reaches that line of code. You can use the shortcut b instead of spelling out the full name, too.

The Continue command is used to continue execution after a breakpoint was hit. You can simply use the shortcut c instead of spelling out the full word.

Breakpoints are very useful, but sometimes you don’t want the application to stop running unless a certain condition has occurred.

This is where the Breakpoint with condition command comes in.

In our example program, the code in main.c at line 175 checks the character sent from the UART to see if it matches the q or Q character: 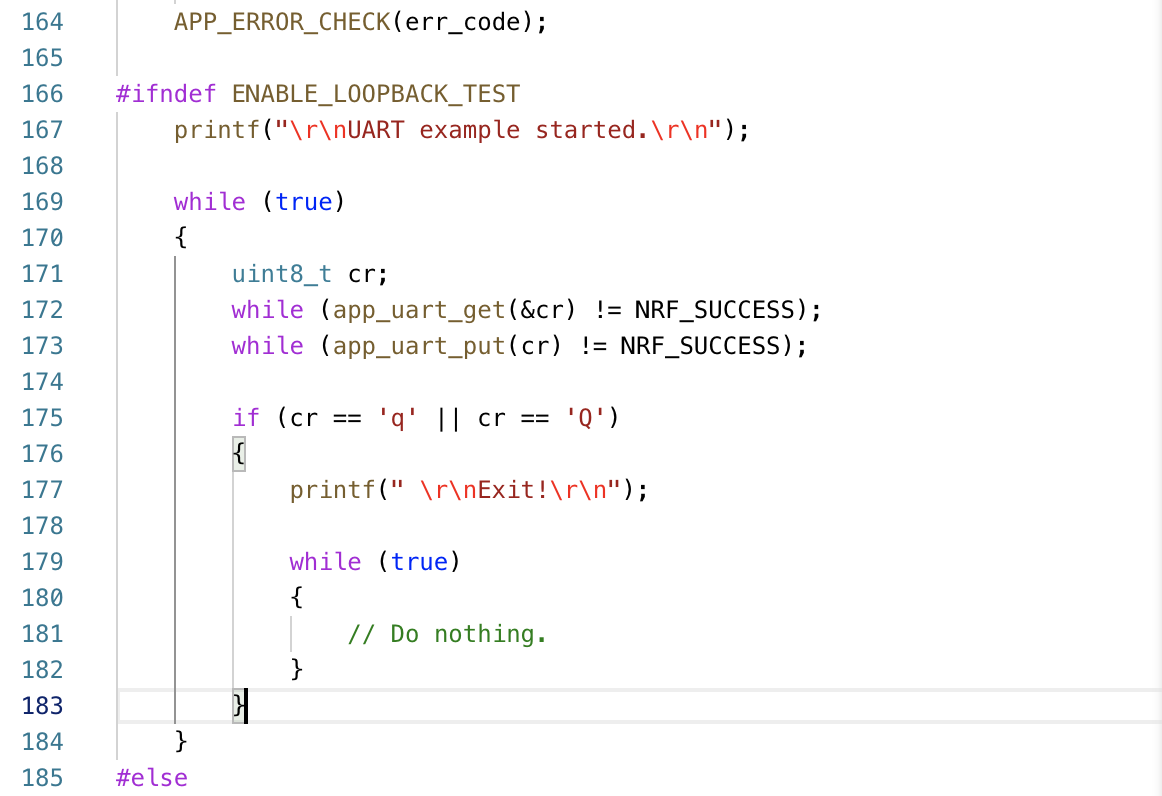 We can set a breakpoint that only stops the program if we receive a specific character (other than q or Q), for example: s.

Now, if we set this breakpoint, we can run the program as normal and then type the character s in the CoolTerm program to send this character to the nRF52 chipset.

We’ll see that the application halts only if that character is sent across the UART.

The Backtrace command is used to show the call stack of the program at the current Program Counter (PC). In simple terms, it shows you a summary of how your program got to where it’s currently at.

Here’s what the output of backtrace looks like when adding the “full” option to show all the local variables as well: 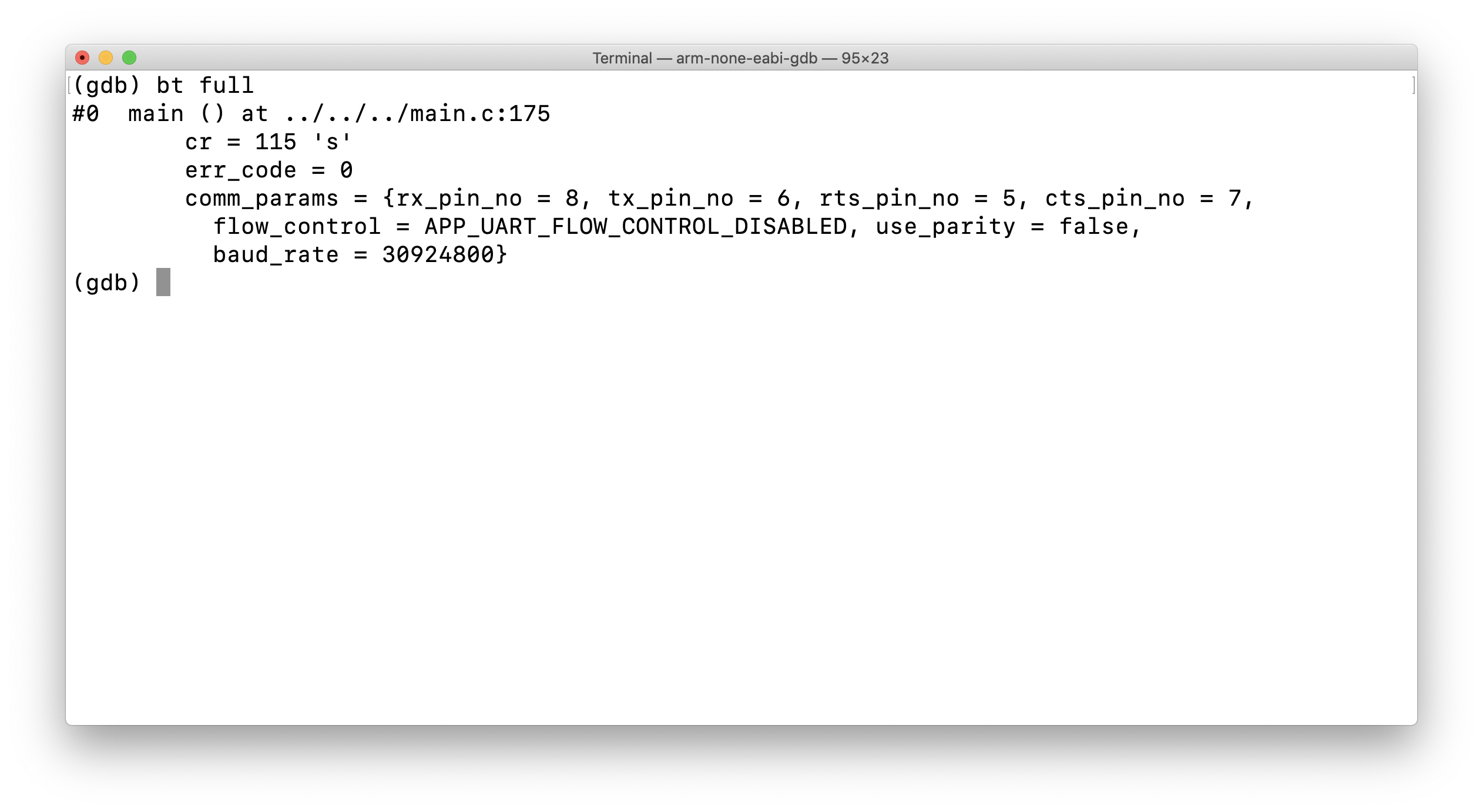 If you want to make it look “pretty” with some basic formatting, you could use the following command:

Here’s a screenshot showing the difference between the output with “pretty” being on or off: 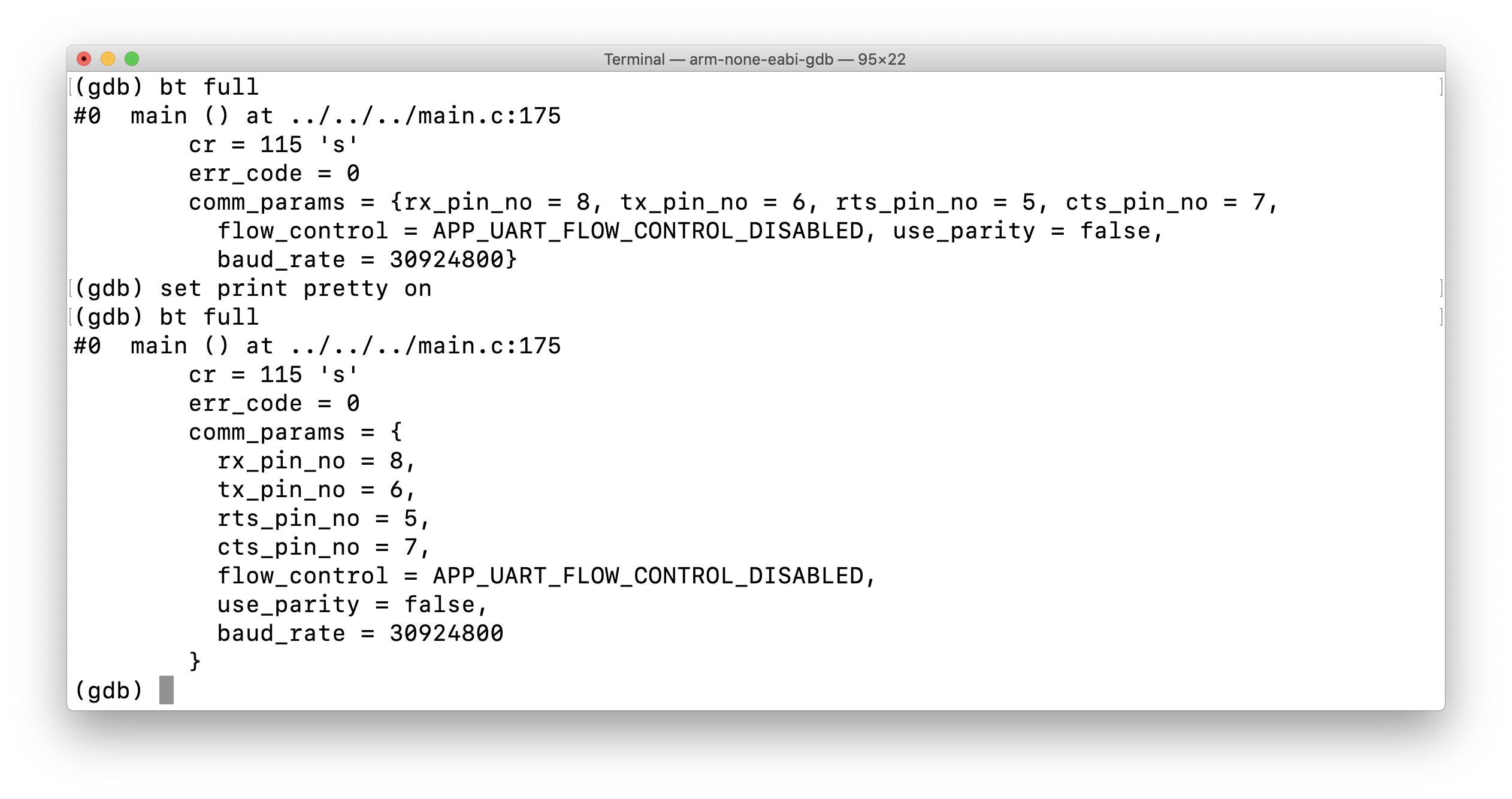 The Step command is used to step through and execute your source code during debugging. It will step into any function in its path, however it will not step into functions that do not contain debugging information.

For reference, here’s our code again from main.c:

Let’s take a look at how the Step command behaves after hitting the breakpoint at main.c:175 that we had set. 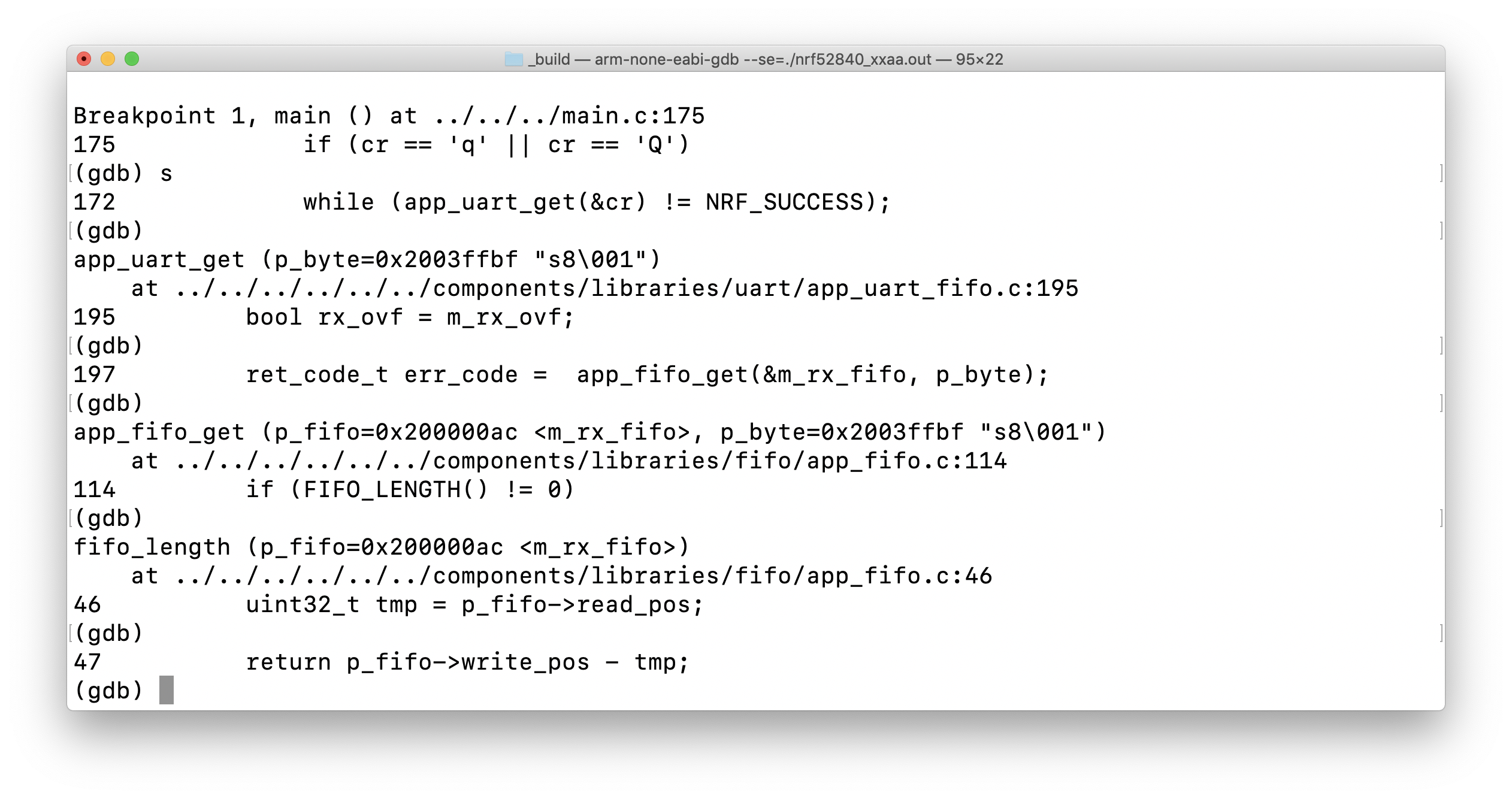 Notice that GDB stepped into the function app_uart_get() after reaching line 172.

The List command shows the source code for the current Program Counter (PC). The default is to show the source code surrounding the location of the PC (with a few code lines before and after).

Here’s an example of using List after we hit our breakpoint at main.c:175. 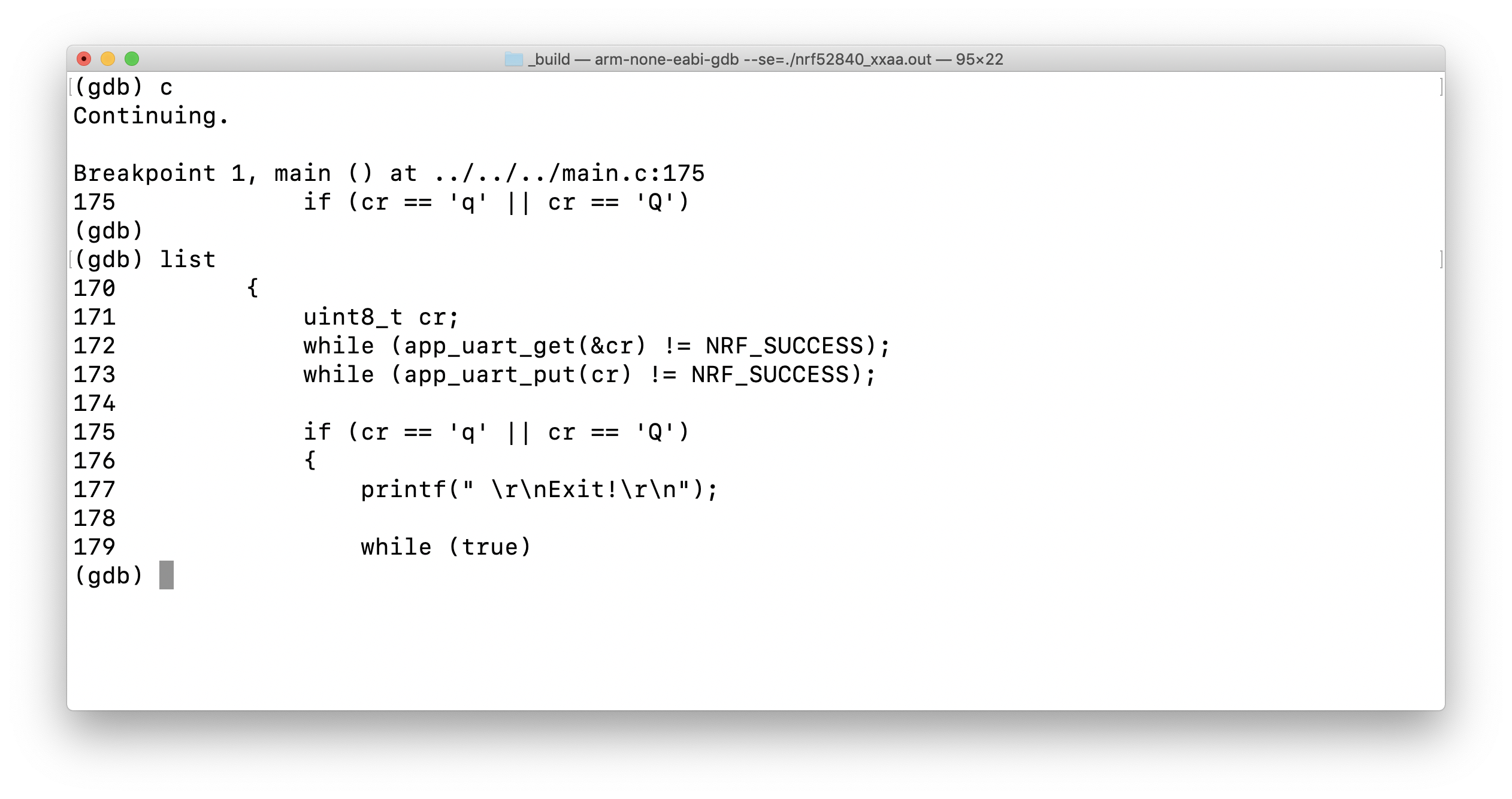 The Info command has many uses, but as the name implies, it is used to display more information for a specific element.

Here are some examples for uses of Info.

One useful feature within GDB is the ability to log all output to a text file. This makes it much easier to share the output of GDB with others, or to simply save the output for later reference.

We hope this post served as a good starting point for using GDB, or a refresher if you’re already familiar with the tool. GDB is a very powerful tool and has way too many functions and commands that we could cover in a single post!

Some ideas for future GDB-related posts include:

What other GDB tips and tricks do you know? Are you facing any problems or struggles with using GDB?

Let us know in the discussion area below!

Finally, I’ll leave you with some useful GDB resources that I’ve referred to over the years: 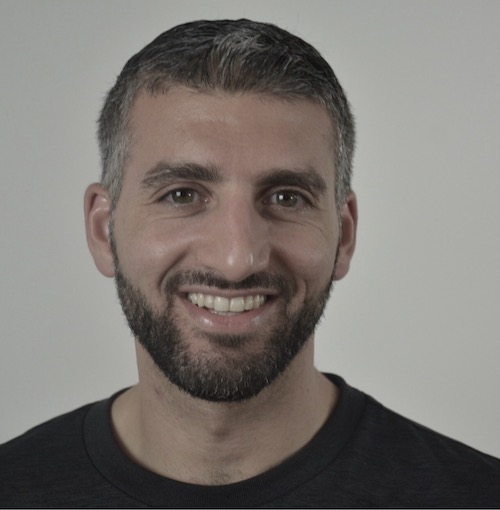 Mohammad Afaneh is the founder and CEO of Novel Bits, a company that focuses on providing comprehensive tutorials, resources, and online training for Bluetooth developers.